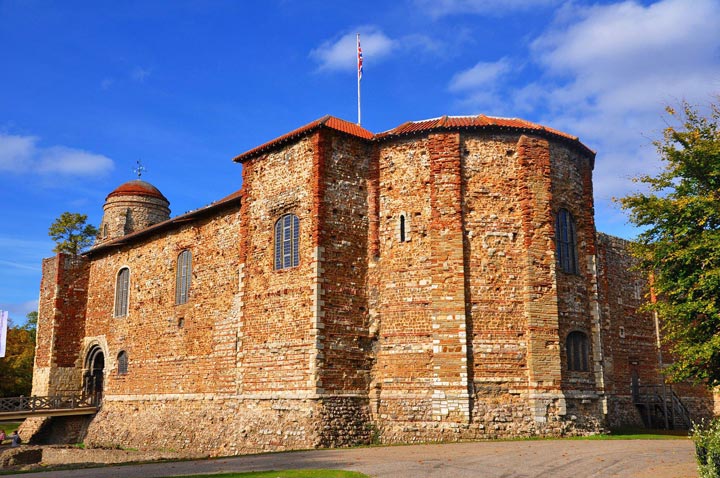 Colchester is now one of England’s fastest growing towns. It provides many opportunities to purchase or rent brand new properties along with all the traditional ranges of property styles throughout the town and surrounding areas, including half-timbered townhouses in the Dutch Quarter, large Victorian dwellings, tiny terraced and country cottages, flats and apartments from converted mills and breweries. A recent development has transformed a section of the town’s old Hythe dockland into modern riverside apartments.

As Britain’s oldest recorded town, Colchester has a rich history. It dates back to the days of the Roman Empire, when Emperor Claudius ruled. ‘Camulodunum’, as it was named then. For a short while, Colchester became the centre of the known universe, when once stood a splendid pillared temple on the site of the town’s castle. Boudica, a native Iceni tribe Queen sacked the town and drove out the Romans. Some of the ruins are still visible, as is much of the massive wall that once surrounded the town centre.

Saxons and Normans also left their passing influence on the town and surrounding countryside, as did the medieval abbeys and monasteries, with the development of local agriculture. Oliver Cromwell transformed large swathes of the land from the church into state-owned estates for military use. The Old Siege House next to the bridge at the bottom of East Hill still bears the marks of the Second Civil War where lead bullets from Roundhead guns besieged the Royalists holed up within. .

Today, the town is a centre for education with Essex University on it’s fringes along with the renowned Colchester Institute, Six-form College, a Language School and excellent state and private schools, amongst which Colchester boasts two of the highest performing schools in the country: the Girls High School and the Royal Grammar School. .

Well placed for work and travel

Being connected to London by a direct rail link in less than 50 minutes and to Norwich in just over an hour, Colchester is ideally placed for those wishing to commute in either direction. A separate town-centre rail station provides links to the famous Essex seaside towns of Clacton, Frinton-On-Sea and Walton-On-The-Naze. The M25’s Junction 28 is just 38 miles away along the A12 trunk road; Stanstead Airport and the M11 just over 30 miles along the recently upgraded A120; Ipswich and the A14 link to Cambridge and the West is just over 18 miles away..

Metropolitan lifestyle in a market town

The town centre is bursting with eateries, ranging from ever-popular fast-food outlets to the select and sophisticated, catering for most tastes be they homespun or international. An annual celebration is the Oyster Feast held at the town hall (with highly prized, locally sourced oysters). As a shopping centre, Colchester boasts the superb Williams & Griffins High Street store, a large Debenhams and Marks & Spencer, the Red Lion Square shopping area, as well as all the well-known branded shops and interesting niche market boutiques and retailers. There is even a thriving town-centre market. Out-of-town trading estates fulfil a quota of supermarket and large stores from DIY to grocery needs..

The Odeon multiplex cinema, a well-stocked Library and the Mercury Theatre, along with nightclubs and a host of bars and public houses, provide places for entertainment, enlightenment and relaxation. Sporting venues include Rollerworld, a 10-Pin bowling alley, the Leisure World swimming and pool and sports centre, Colchester United’s new football stadium, County and club cricket at the Castle Park Cricket Ground and youth and adult matches at the Mill Road Colchester Rugby Club. There’s always something to do and see all year round at the famous Colchester Zoo. The Beth Chatto Gardens and the Dedham Art and Craft Centre are but a short drive away; as is Mersea island (where the oysters come from), Maldon (where the salt comes from) and Saffron Walden (where highly acclaimed saffron plants were grown). .

Surrounded by nature and beauty

The River Colne flows through the town, meandering on its way to the estuary. The nearer it gets to the coast the more tidal it becomes, mixing fresh with salt water. It provides sporting opportunities for anglers and sailors alike. Numerous nature reserves and sites of particular historical and cultural acclaim form an easy-access ring of interest to occupy free-time activity. Colchester has plenty of green open spaces, including Castle Park and Highwoods Country Park. Surrounding countryside, immortalised by world-famous landscape painter John Constable, abounds with beautiful and interesting places to visit. Enjoy nearby woodland, coastal and riverside walks, and many National Trust properties to explore.

Once logged in you can amend your personal details, add/amend/delete email alerts and access your saved properties. New property alerts are sent to your requested email address at your selected frequency once an agent publishes a new property or a price change takes place. To manage your alerts, click on the members icon at the top of the screen once you are logged in alternatively you can access this from each and every property.

You can register here!